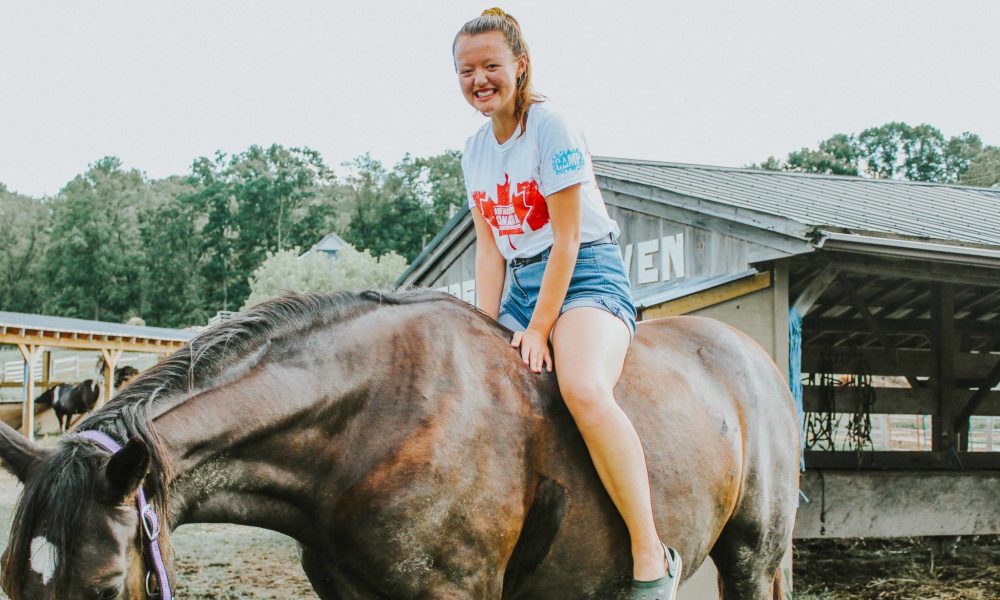 This summer I worked as an Assistant Ride Instructor at Camp Arowhon.

My motivation for doing AmeriCamp Canada was twofold: I wanted to have an impact on children’s lives, and I didn’t want to be sat around doing nothing all summer, I wanted to be truly living my life! And I have to say, this summer I think I worked harder than I ever have before!

Getting a job at a Camp was actually a lot easier than I expected, I filled in some forms online, then went to the Camp fair in London, met my Camp’s Assistant Director and had a bit of a chat about the role I was interested in, and my experience, and at the end of the conversation she offered me the job! This particularly surprised me, as I hadn’t actually been aware I was being interviewed until this point… I ended up having to fly out the very same day I finished at University, so it all seemed like a blur and suddenly I was in Toronto!

can describe it is like a cross between Starbuck’s and McDonalds, it’s fast food, but for coffee and doughnuts… It’s generally amazing though because it’s ridiculously cheap!

Once I got to Camp I settled in really quickly, as I was ride staff I arrived a week before all other staff so we could get to know the horses. This was a pretty chilled time, but it was so nice to bond with the other ride staff, we were friends for life within the first couple of days. I love those girls!

Full staff arrived and we had a week of pre-Camp, which had lots of lectures on how to look after children and persuade them to your activity etc. The training they gave was really good, and can also be applied whenever working with kids and even with adults, you always need to know how to listen well and be supportive of someone, no matter their age.

At the end of pre-Camp we had an on-site day off, which was fun, I attempted to learn to windsurf, you get all sorts of cool opportunities at Camp. And then the children arrived…!

Most of the time at Arowhon we kept to the same schedule, which is actually quite nice, it gave us a nice kind of routine we got used to crazily quickly. Here’s a quick overview of what my days looked like: Breakfast line-up, when the flag was raised in front of the whole Camp, was at 7.55am, so I normally rolled out of bed at around 7.45, threw some clothes on and wandered bleary eyed down to the Main Lodge (basically the dining hall) Every few days I would get up at 7.15 though, to get the horses in and feed them before breakfast. As I was an assistant instructor, I didn’t live with the campers, but if I had then I would have been up earlier with the music blaring making sure my campers were on time to breakfast!

Meal times at Camp were the most crazy time, but also probably the part I miss the most! It was always noisy and lively, and there would be unlimited cooked food on the tables (well, sort of unlimited, there was a “you kill it, you fill it” policy, so you might have to get more from the kitchen). The food was so good; there was more choice than I expected.

After breakfast, the kids went for cabin clean up, and I had a bit of a break until about 9.20am, when I went up to the barn and got the horses groomed and tacked up for the morning’s lessons. I had 4 who I mainly looked after, though we all helped each other out to get them all ready on time. At 9.50 the first period started, there were 4 main periods each day, plus an extra one called general just before lunch. In normal periods we would have 14 children programmed to come to Ride, 5 would go out on trail, and 9 would split into two groups in the rings.

In the morning our Head Ride would tell us what we would be doing for each period, this could be leading or backing a trail, teaching or assisting in the ring. You would know each morning what “section” the children coming would be from, but you never knew which children would have chosen to come to Ride that day, so you never quite knew what to expect! That and horses are hardly known for being predictable creatures… I mentioned we would be told what “sections” were coming each period, the Camp was divided into 6 different sections, by gender and then age (Juniors, Inters and Seniors) so for example we might have 2 Inter Girls and 3 Inter boys coming on trail 4th period. The sections each had cheers as well, which they would chant at the top of their voices in the Main Lodge at the end of meal times, my favourite was probably the Junior Boys which included the line “Ain’t we Funky Now” (Try shouting it, they loved it because of what it sounds similar to…)

I really enjoyed teaching the kids, it was the biggest challenge for me, I’d had no previous experience of actually teaching horse-riding, and there were so many times when the horses were not in the mood to co-operate, but I learnt a lot, and by the end of my time at Camp I was so much more confident in my role. I knew what to do when things went wrong, and most importantly how to make sure all of the kids who I was teaching had fun and got something out of the lesson, even if they were all different abilities. There were also some campers who I am so proud of, I really feel like I taught them something, I watched their riding improve so much over the summer and I saw how much they enjoyed themselves in the process.

Taking the kids out on trail was an awesome experience. We got to bond with the campers, chatting with them and generally relaxing a little. This was also our time to ride, back at my normal stables I can really feel how much I have improved over the summer myself, through teaching the children and being in the saddle so much. I say relax a little, there would always be little things to deal with on trail, like horses wandering off into the forest, taking their rider with them… But like I said with the lessons, this experience taught me so well how to cope with the unpredictable! You just assess the situation and work out what you can do to resolve it!

Working at Camp makes you so ready and willing to change and adapt! I guess at first I found it quite hard to deal with things not going the way I had planned them to, but at the end of the day, these things happen, and it’s not the end of the world, you just make the best of the situation, and the campers will probably think it was awesome anyway!

Our extra period called General was different to all the others, and this was when a lot of my favourite Camp experiences happened. The campers could go wherever they liked in General, they didn’t have to be programmed there, so you could have 1 or 100 children turn up in theory! Normally we got about 10-15 at Ride though. Because we didn’t know who would be coming the children didn’t ride in General, we just did fun activities with the horses. These included painting them (we made a “zebra”…), making them biscuits, washing them with shampoo, free jumping (directing a horse to a jump without a rider) and a lot of other fun stuff. The kids could adopt horses, they brushed and fed them, and some of them got very attached which was very cute to see. One of the most fun things we did in General was trick riding, where we took the saddles off and basically messed around a bit, letting the kids stand up on the horses’ backs, climb between two horses, slide off their bums, we even once got all 5 Ride staff onto one horse!

One of my highlights from Camp was being able to do water trails. We had to see which horses would go into the water, so we had a few staff rides, riding bareback down to the lake and getting the horses to go swimming! It was so fun, and a lot of our horses were willing to go into the water, which was awesome. We also did a water trail for staff, as part of Staff Morale, which was basically to make sure everyone was kept happy at Camp. The staff water trails were the best; we had a lot of fun taking all the non-ride staff into the water on horseback!

In the evenings we would help out with evening activities for the kids, so I did see them when I wasn’t at the stables! You could go and say goodnight to the campers too, I had a Junior girl to pay special attention to as she had been feeling homesick, so it was really nice to bond with her and her cabin outside of the stable.

There would be a weekly campfire where campers and staff would perform for the whole Camp, which was always really nice. Once in a while there would be torchlight paddles, where campers would do a kind sequence for the rest of camp with torches attached to their canoes. Canadians love their canoes, it’s actually really fun, and on a few days off I took one of the canoes and had a paddle and a swim. We once took the big Camp canoe out to visit the juniors who were out on a camping trip, it was such a bad storm, so much rain and it was even thundering so we had to stay near to the shore, but honestly it was hilarious and the guys with us were such a laugh, it didn’t actually matter that we were drenched!

After Camp finished I had 3 weeks travelling. I had the opportunity to work at a family Camp with other international staff in this time, which was really nice, as it meant I got to find out what other people had been doing, and meet other people who had had a similar experience to me but at different Camps. I also got a bus to New York City (saw Idina Menzel on Broadway. Life made.), travelled to Montreal, and saw Niagara Falls as well as chilling in Toronto. Travelling was the perfect way to end my Canadian experience.