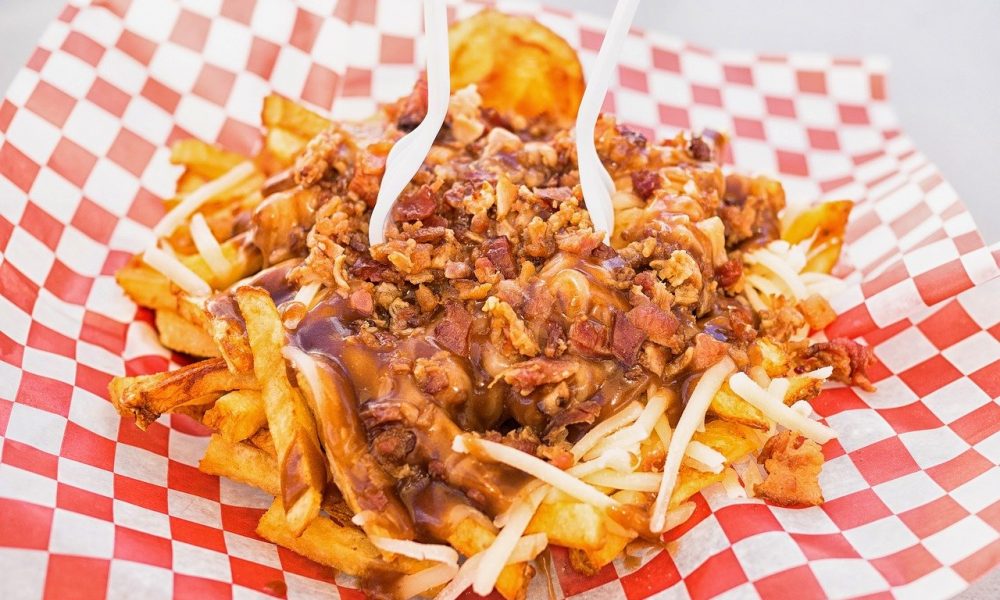 Despite its relative lack of aesthetic appeal, this concoction comprising French-fries, gravy and cheese curds is a delicacy that must be sampled during your trip to Canada.

A street snack slowly infiltrating the food sector within the United States, Poutine is emerging as a contender for the prize of best casual American Canadian cuisine.

Such is the popularity of poutine within Canada that fast-food heavyweights McDonalds have started selling the delicacy in stores across the country.

Considered a trademark by-product of the Canadian food industry, maple syrup has come to represent Canadian culture and the pride of the nation.

Such is the popularity of maple syrup that it has been raised to super-food status and remains the most popular topping on pancakes and waffles.

A staggering seventy-five to eighty percent of the world’s maple syrup is produced in Quebec, and the lush liquid continues to sprinkle goodness on sweet and savoury dishes alike.

Canadians love bacon. Whether its strip bacon, lean or pea-meal bacon (otherwise known as ‘Canadian bacon’), Canadian residents will happily pig out on the porky product.

Canada is home to some of the freshest oysters in the world, with fresh produce available throughout the year.

While the slippery salt-water molluscs do have an acquired taste, the aphrodisiacs are famous within Canada, and are especially popular on the Atlantic and Pacific coast.

Developed by Jewish delis in Montreal, the meat is a hybrid between pastrami and corned beef; traditionally served on rye bread with mustard, this meaty treat has been popular since the 1900s and is a firm favourite with Canadians.

Named after the traditional symbol of Canada, Beaver Tails are essentially a flattened donut without the hole and are often considered to be a textbook Canadian treat.

Following a recipe handed down by Graham Hooker’s family Beaver Tails were introduced to a wider audience in 1978 and can be topped with an assortment of toppings, including sugar, Nutella and an assortment of other sweet toppings.

Butter tarts are steeped in Canadian food tradition; the origin of the delicacy can be traced back to the turn of the century.

Comprising gentle, flaky crust and a creamy filling made with butter, sugar and egg, these delightful desserts are sometimes be made with raisins, and will leave you craving more following your first sitting.

A triple-layered taste-fest, the precise origin date of this delicious delight cannot be pinpointed, though it has been suggested that the product derived from a 1952 recipe for a chocolate square.

A French-Canadian dish dating back to 1600, this flakey-based tart is named after the container in which it’s baked.

Typically filled with meat produce including pork, beef, veal or game, the filling is seasoned with an assortment of herbs and spices; a fish-based filling is used in some coastal regions as an alternative to the conventional meaty flavouring.

Although this meal is traditionally eaten at Christmas and New Year, stores within Quebec keep yearly stock; such is the popularity of the dish.

Although this dessert may resemble lemon meringue pie, flapper pie contains a cinnamon graham base and is crowned with a vanilla custard filling and meringue topping.

Formed in Manitoba, flapper pie has gained huge popularity in Alberta and Saskatchewan; once the taste of this delightful dessert hits your palate, you’ll be pondering how its popularity outside of Canada has not skyrocketed.